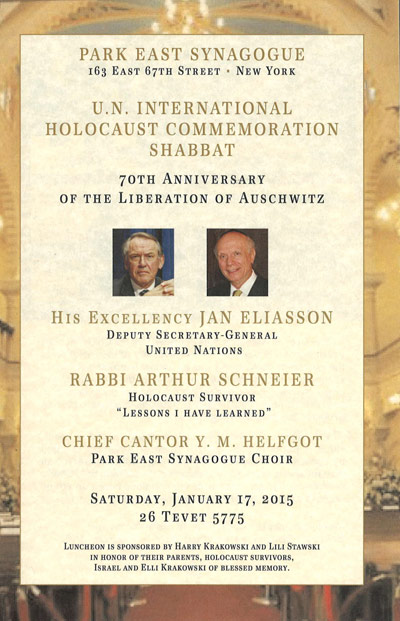 Shabbat Shalom. Salaam. Peace be with you all. It is a great honour to be with you to mark this solemn occasion. Thank you, Rabbi Arthur Schneier, for your invitation and your kind introduction.

We gather here today in remembrance. The United Nations is marking the International Day of Remembrance in Memory of the Victims of the Holocaust on 27 January, in the presence of Secretary-General Ban Ki-moon and the President of Israel, Reuven Rivlin. I am proud to have been President of the General Assembly when the Memorial Day was decided 10 years ago. This date, 27th January, was chosen specifically to commemorate the liberation of Auschwitz.

My thanks go to Rabbi Schneier and to everyone at Park East Synagogue for your unfailing efforts in the name of “tikkun olam” [repairing the world], and especially your work to improve understanding between faith-based communities. This is more necessary than ever, at a time when perpetrators of horrible violence are invoking religious beliefs, from Syria and Iraq to Nigeria and France. And at a time when there is a risk of a vicious circle of religious polarization and extremism in the world.

In response, I can do no better than to quote the founding principle of Rabbi Schneier’s Appeal of Conscience Foundation: “A crime committed in the name of religion is the greatest crime against religion”.

This year, 2015, marks the seventieth anniversary of the end of the Second World War, when the human evidence of the Holocaust emerged fully to shock the world.

I was just five years old in 1945. Despite my youth, and despite my mother’s strong objections, my father insisted on showing me photographs of the death camps.

I will never forget seeing those pictures of the ruins of human beings, some dead, some just barely alive, and listening to my father’s attempts to explain to his son, sitting on his lap, the evil behind them.

Like many others, I responded to the Holocaust — to the evidence of the unbearable suffering human beings could inflict on each other. I responded with the thought that this must never be allowed to happen again.

Let us remember that the United Nations was born in the spirit of this response. People all over the world, and their leaders, vowed: “Never Again”. The Holocaust was part of our formative experience as an Organization. This, we should never forget.

I would say the years between 1930 and 1945 were one of the darkest periods of human history. In reaction to that, we saw the establishment of the United Nations, the Universal Declaration of Human Rights, European integration — all coming out of the consciousness that we have to go in another direction.

Today, I would like to pay tribute to all Holocaust survivors, particularly those with us in the Synagogue. We are grateful and humble, and we are inspired by your example of the resilience of the human spirit.

Seventy years on, disbelief and incomprehension still surround the Holocaust, and the genocides since then, including those in Rwanda and at Srebrenica.

The urge to define and destroy the “Other” is a difficult and disturbing phenomenon in human history and the human psyche. It involves morality and ethics, psychology, complex power politics and cultural influences. But we cannot and must not look away.

If we are to prevent genocide, we must first try to understand the forces behind it. That is a component of the UN’s mission on genocide prevention, one of our most important and most demanding tasks. The Secretary-General has a Special Advisor on the Prevention of Genocide, Adama Dieng of Senegal, a prominent lawyer, to assist him in this work.
Our commitment to “Never Again” is constantly tested and too often found wanting. There is still a gap between rhetoric and action. Every time we say “never again”, we are in fact admitting failure to prevent. In the past year alone, we have seen terrible acts of inhumanity in Iraq and Syria, in the Central African Republic and Nigeria.

The most important lesson for us all is that we must act earlier. Preventing genocide must not begin when we are witnessing atrocities that fit the definition of genocide. Genocide and other atrocity crimes come out of processes that develop over time. The seeds of discrimination, racism and hatred are planted and often allowed to grow. People too often turn away instead of up-rooting these seeds.

We must recognize that there are many opportunities to take action, before a situation escalates to violence and the point of no return. We must listen to the vibrations in the ground coming from the division of human beings into “us” and “them”.

The Holocaust did not start with Auschwitz. It started with bias, discrimination, looking down on people, the anti-Semitic slogans and laws that preceded Kristallnacht, and with rallies which provided both an identity and a cause, however perverted, for people who evidently needed both.

Today, we have to be vigilant and watchful. When governments fail to deliver, allegiances turn elsewhere. Often, people turn to more primordial identities, to their most basic beliefs, connected to religion, ethnicity, language or tribe. This can then give rise to dangerous polarization. Opportunistic leaders and political parties are quick to build a power-base around these distinctions. This can lead to tension between communities, to human rights abuses and to violence, as we see in the world today.

This dynamic makes our work as peace makers, as human rights workers and as humanitarians much more difficult. Highly charged emotional appeals do not easily yield to negotiation, enquiry, mediation, conciliation, arbitration and other peaceful means, and I quote from Chapter VI of the UN Charter.

Once these forces have been unleashed, they take on a life of their own. Even if outside help is clearly needed, the world and actors outside and beyond the borders are seen as part of the problem, rather than part of the solution.

The politics of polarization is a key factor in the discrimination, prejudice and violence we see today around the world. We have seen a deeply troubling rise in anti-Semitism in Europe. Bias against Muslims is increasingly widespread, and anti-Christian sentiment is of deep concern in many places. The prolonged conflict between Israelis and Palestinians has contributed to deepening mistrust and false stereotypes. And in many countries, we see an increase in anti-immigration rhetoric, despite the significant contributions that immigrants make to our societies, not least in this country.

Here is an important role for religious and community leaders. I talked to Rabbi Schneier about this before today’s ceremony. Our interdependent world places high value on authentic voices connected with spiritual leadership and with the grassroots in our societies. Local leaders have a great opportunity and responsibility to channel people’s needs, aspirations and fears. They must focus their grievances in a way that recognizes the human rights and inherent dignity of all.

As Rabbi Schneier said when he visited Srebrenica, “Religious leaders can build bridges between all of God’s children.”

The United Nations remains determined to prevent genocide and other atrocity crimes. Preventing serious violations is also a key objective of the Human Rights Up Front initiative, launched by the Secretary-General in 2013 to ensure a UN-system approach to protecting people. The initiative is based on responding to early warning signs of human rights violations that can turn into atrocities. It also aims to reinforce the central role of human rights in all aspects of our work.

Human Rights Up Front has begun to make a difference. One example is South Sudan, where the initiative provided the basis for the decision by the leadership of the mission to open the gates of UN premises to protect some 75,000 civilians who were desperately seeking safety in December 2013.

One of the most powerful ways to counter genocide and other atrocity crimes is through effective and inclusive governance and institutions. We must never forget that. Professional security forces, an independent judiciary and strong civil society organizations can encourage open dialogue, defuse sources of tension and counter hostility and intolerance.

The United Nations also bears witness and raises awareness of the Holocaust and other genocides. Our Outreach Programme works with teachers and students on every continent to promote tolerance and warn about the consequences of anti-Semitism and other forms of discrimination.

Lastly, I recall the importance of the Alliance of Civilizations in working for tolerance and reconciliation. The Alliance was established by the United Nations some ten years ago. It is a tool for building bridges across cultures and religions, while learning from the bitter experiences of the past.

In closing, I would like to say that it is only through facing up to the past that we can hope to learn the right lessons and apply them to the future.

It is only by encouraging good governance, good education and strong institutions that we can prevent the demonization of outsiders and stop the corrosive politics of division.

It is only by acting early and decisively that we can prevent genocide and other atrocity crimes.

And it is only by living up to the words of the Preamble of the UN Charter that we can be united in purpose and united in action, “determined to re-affirm faith in fundamental human rights, in the dignity and worth of the human person and in the equal rights of men and women”.

It is time for us all to stand up proudly and unfailingly for our common values and our common humanity.