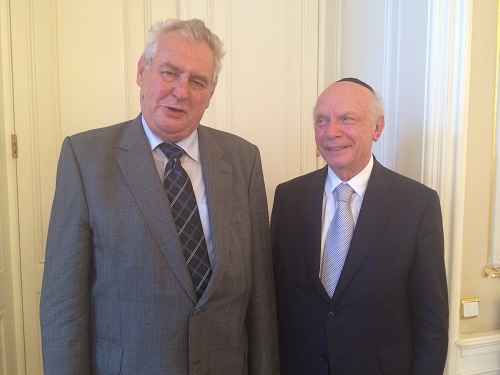 Rabbi Arthur Schneier, President and founder of the Appeal of Conscience Foundation met with the President of the Czech Republic, Milos Zeman in Prague, to address heightened nationalism, xenophobia, and anti-Semitism spreading across Europe.

“Discrimination is worsening and xenophobic practices are increasing,” warned Rabbi Arthur Schneier. “The fight against anti-Semitism, racial discrimination, xenophobia and related intolerance must remain a global challenge; we cannot ignore the upsurge of attacks against innocent people. Nationalism, xenophobia, and anti-Semitism remain the most dangerous forms of discrimination and it is vital that we confront extremist ideologies, prejudices and stereotypes of cultural and religious intolerance.”

The Appeal of Conscience Foundation, founded by Rabbi Arthur Schneier in 1965, has worked on behalf of religious freedom and human rights throughout the world. This interfaith coalition of business and religious leaders promotes peace, tolerance and ethnic conflict resolution. The Foundation believes that freedom, democracy and human rights are the fundamental values that give nations of the world their best hope for peace, security and shared prosperity.

As head of the interfaith Appeal of Conscience Foundation, Rabbi Arthur Schneier has been a consistent and effective voice for peaceful coexistence, inter-ethnic and inter-religious cooperation. He served as U.S. Alternate Representative to the United Nations, member of the UN Alliance of Civilizations High Level Group appointed by UN Secretary-General Kofi Annan and Ambassador of the Alliance appointed by UN Secretary-General Ban Ki-moon.