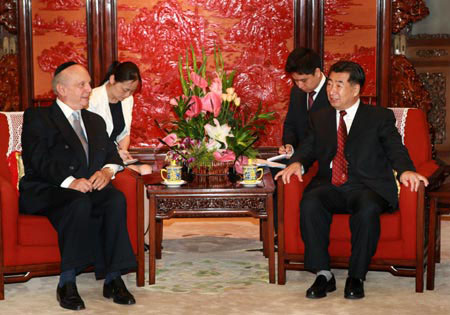 Chinese Vice Premier Hui Liangyu met with Rabbi Arthur Schneier and ACF delegates to exchange views on Sino-US relations and religious cooperation between the two nations. The ACF delegation was in China from August 19-25.

During a private meeting, Vice Premier Hui expressed his appreciation to Rabbi Arthur Schneier and the ACF for its efforts in boosting the mutual understanding and friendship between Chinese and American peoples. He also briefed the delegation about China’s social and economic development.

Foreign Minister Yang Jiechi and the ACF delegation also met to discuss the challenges facing the international community as well as support for the Chinese earthquake victims.

The ACF delegation traveled to the Olympic Village to tour the religious facilities of Buddhist, Catholic, Hindu, Jewish, Muslim, Orthodox, and Protestant prayer rooms for the athletes and attended the closing ceremony of the 2008 Beijing Olympics.