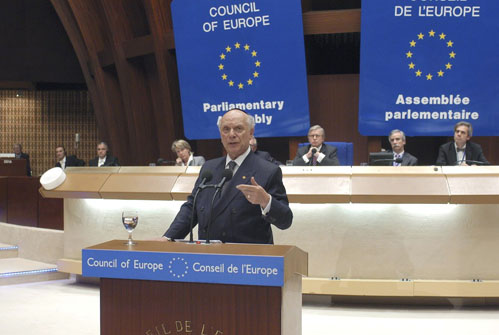 Rabbi Arthur Schneier addressed the Parliamentary Assembly of the Council of Europe (PACE) and called for the adoption of strong measures to combat the rise of anti-Semitism in Europe.

“A new mutation of anti-Semitism, fanned by extremists on the left and right and radical Islam, is casting a shadow on the core values of Europe” Rabbi Arthur Schneier said in his remarks before the 2007 third session of the Parliamentary Assembly in Strasbourg, France. Rabbi Arthur Schneier, a Holocaust survivor, continued “I am pained that once again we have to confront the demon of anti-Semitism in Europe and the denial of the Holocaust sixty- two years after the defeat of Nazi tyranny.”