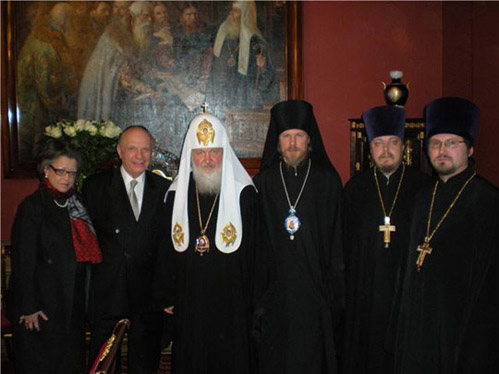 President and founder of the Appeal of Conscience Foundation, Rabbi Arthur Schneier will participate in the enthronement ceremonies for newly elected Kyrill, the Patriarch of Russia and all Moscow. The Rabbi has known the Patriarch for more than 30 years, and along with the Appeal of Conscience Foundation, has hosted him on numerous occasions in New York. The two have worked together in furthering inter-religious dialogue in Russia and worldwide.

“I have known the new Patriarch as a pastor, statesman and gifted orator,” said Rabbi Arthur Schneier. “He has been Head of the External Relations Department for years and is widely known for his outreach. I look forward to working with him in strengthening relations between the religious communities of Russia and the United States.”

In a personal message to the newly elected Patriarch Kyrill, Rabbi Arthur said the following:

It is my fervent prayer that God may give you strength to apply your intellect and heart, and the wisdom He granted you to serve the Russian people and all mankind.

“May He continue to bless our joint ventures in furthering mutual understanding, peaceful cooperation and inter-religious dialogue. May we encourage bonds of friendship between the American and Russian people.”