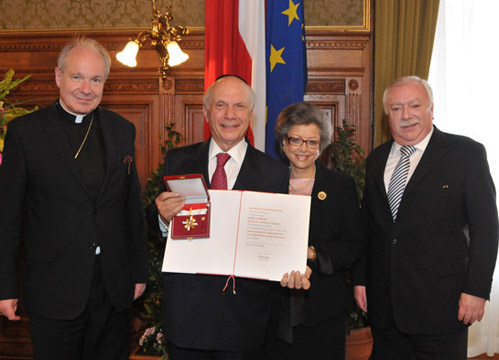 Dr. Michael Haupl, the Governor of the Province of Vienna presents the Grand Decoration of Honor in Gold for Special Services to ACF President Rabbi Arthur Schneier for advocating Vienna on numerous occasions, helping to end the bloodshed in the Balkans and bringing about reconciliation, peace and religious freedom in Eastern Europe.

The Province of Vienna, on behalf of the Republic of Austria, honors both Austrian and foreign leading figures who have been of special service to Austria, by conferring visible honors upon them. The law establishing the Decoration of Honor for Special Services to the Republic of Austria was enacted in 1952 by the National Assembly.

Governor and Mayor Haupl,
Members of the City Government,
Cardinal Schönborn,
Chief Rabbi Eisenberg,
Your Excellencies,
Representatives of the United States and Israel,

I am greatly honored to receive the Grand Decoration of Honor in Gold in my birthplace Vienna. My dear friend, Dr. Haupl, I am particularly grateful to receive this high recognition from you the distinguished and renowned Mayor of this great city. Your Eminence, Cardinal Schönborn, thank you for your warm and gracious laudatio it comes from a biased friend sharing a commitment to inter-religious dialogue.

I remember my sweet early childhood days in Vienna and also the painful years. The death of my father in 1936, whose grave in Zentral Friedh of is marked with a tombstone that also bears the name of my grandfather, Josef Schneier, who was deported to Theresienstadt in 1942, never to be seen alive again. After the Anschluss, I became a pariah (Unerwünscht), unwanted in my school, parks, and movie theaters in my hometown. It has been a long journey from being Unerwünscht  unwanted  fighting for survival, to gaining my freedom in the United States.

We cannot change history, nor forget the horrors of the past. I carry my scars as a Holocaust survivor but I did not permit myself to become paralyzed. President Bill Clinton once said: “It’s how you handle adversity, not how it affects you. The main thing is never, never, never quit.” I resolved not to remain silent in face of injustice but to dedicate my life in pursuit of peace and tolerance and to advance lives for all of God’s children. This is why I founded in 1965, the Appeal of Conscience Foundation, an interfaith coalition of religious and business leaders working on behalf of religious freedom, human rights, tolerance and inter-religious action in the service of humanity. My dear wife, Elisabeth, is actively engaged with me in this endeavor and our daughter Karen and granddaughter Casey representing the rest of the family have become imbued with that spirit. I am blessed with friends like Dr. Srgjan Kerim, former president of the UN General Assembly, Ambassador and Mrs. Gerhardt Pfanzelter, Ambassador and Mrs. Andras Simonyi distinguished diplomats who have share my vision for a stable, secure, and peaceful world and my classmate Enrico Mantello, Trustee of the Appeal of Conscience Foundation, among others.

On Kristallnacht, I could not have imagined that I would live to see the changes that have taken place, the emergence of a democratic Austria, member of the European Union, member of the UN Security Council at a time when a new nuclear threat hovers over us. I note the visit of Chancellor Faymann to Israel this week accompanied by Dr. Muzikant, president of the Jewish community of Vienna, in an effort to strengthen the bilateral relationship between Austria and Israel and in pursuit of peace between Israelis and Palestinians.

The Appeal of Conscience Foundation has used Vienna for major conferences to help end the bloodshed in the Balkans and bring about reconciliation and peace, to help open the Iron Curtain for religious freedom. As a Member of the United Nations Alliance of Civilizations High Level Group, I was pleased to advocate Vienna as the site for the Alliance of Civilizations Forum 2012.

Vienna has thrived as a melting pot of ethnic and cultural diversity. Diversity, coexistence and interdependence are part of the new order in the 21st Century. The economic tsunami and unemployment that have buffeted the United States and now Europe have increased nationalism and ethnic conflict, building new walls of ethnic hatred, xenophobia, anti-Semitism and Isalmophobia. Exacerbated by the manipulations of the irresponsible and unscrupulous, the fear of the other has been exploited to deprive the human rights of the stranger in our midst. Love of country and patriotic fervor are duties; nationalism and extremism which promulgate contempt of other nations and cultures divide and destabilize the society. Furthermore, as Ethics of the Fathers teaches: “Hatred of the other removes a man from this world.” (Avot 2:16)

As one who has recently celebrated his 80th birthday the recognition from my hometown is a precious birthday present. As a new octogenarian, I can embrace Richard Bach’s quote, “Here is a test to find whether your mission on Earth is finished: if you’re alive, it isn’t.”

As long as God grants me life, in the spirit of Joseph “I will seek my brothers, see and reach out to all of God’s children” (Genesis 37:16) to build bridges and remove walls between people and nations.

My prayerful best wishes to the people of Vienna: may this city of culture and diversity prosper in freedom, peace, and tolerance.