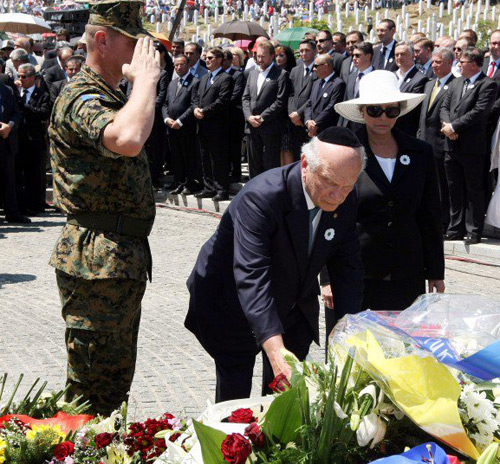 Rabbi Arthur Schneier, founder and President of the Appeal of Conscience Foundation and the Senior Rabbi at Park East Synagogue in New York delivered the keynote address at the seventeenth annual memorial at Bosnia’s Potocari Memorial Park to commemorate the Srebrenica Genocide, Europe’s largest massacre since World War II. It was the first time that a non-Muslim has ever taken part in this annual memorial. 8,000 Muslim men and boys were killed on July 11, 1995.The massacre is considered the most brutal chapter of the Bosnian War.

Rabbi Schneier, who also delivered a personal message from President Barack Obama, spoke at the request of Grand Mufti Ceric of Bosnia and Herzegovina. The two have worked closely together for more than 20 years. In 1992 in Berne, Switzerland, The Appeal of Conscience Foundation led by Rabbi Schneier brought together for the first time top religious leaders of former Yugoslavia including Cardinal Vinko Puljic, Archbishop of Sarajevo, formally of Zagreb, Patriarch Pavle of the Serbian Orthodox Church; Grand Mufti Jakub efendi Selimoski of Sarajevo calling for an end to the bloodshed and joined in “the Berne Declaration” proclaiming “a crime in the name of religion is the greatest crime against religion”.

Rabbi Schneier a Holocaust survivor told the more than 50,000 who attended the commemoration, “My entire family was murdered in Auschwitz and in Terezin. I know the anguish and despair that you feel when those dearest to you are brutally murdered for no other reason than their religion or ethnicity. Although the devastating pain of this crime belongs uniquely to the people of Bosnia and Srebrenica, and most particularly to the family members of its victims, you are not alone. I grieve with you, I feel your anguish, I hear your cry and I feel your pain. The brutality of what took place here can never be forgotten. And the totality of this crime must be remembered, not denied. The testimony of those who survived cannot be refuted and the historical fact cannot be altered.”

The Rabbi read a message from President Obama a portion of which stated, “The name Srebrenica will forever be associated with some of the darkest acts of the 20th century. A measure of justice is finally being served for the victims in courts in The Hague and Bosnia and Herzegovina, as the perpetrators of this atrocity, including Ratko Mladic and Radovan Karadzic, are now being called to account for their actions. We know that Srebrenica’s future, and that of Bosnia and Herzegovina, will not be held back by its painful recent history. The United States rejects efforts to distort the scope of this atrocity, rationalize the motivations behind it, blame the victims, and deny the indisputable fact that it was genocide. The United States stands with the people of Bosnia and Herzegovina and grieves again for the loss of so many loved ones. Our hearts and deepest sympathies are with them, and we pledge our enduring commitment to support their aspirations for a better tomorrow.”

Rabbi Schneier underscored that while remembering those slain is vital, so too is bringing those responsible to justice. “For those who committed this crime, there can be no absolution. They bear a mark of Cain, which no man can wash away. No matter how long it may take, justice has a relentless memory and justice will be done.”

The Rabbi was also critical of the world’s indifference at the time that these horrors were taking place. “Even as we condemn the unique and inescapable guilt of the perpetrators, we must acknowledge that for the rest of the world, we too share in its shame. For just as this was a crime committed against all humanity, it was a crime allowed by all humanity.”

In comments directed at the survivors Rabbi Schneier said, “Today we remember the horrors of the past but vow not to be paralyzed by the past. Today”s commemoration is also about the future: mankind’s future and your future. You and I survived our tragedies. And despite the excruciating pain, it is our obligation to those who did not survive that we continue to participate in society and in perfecting this world.”