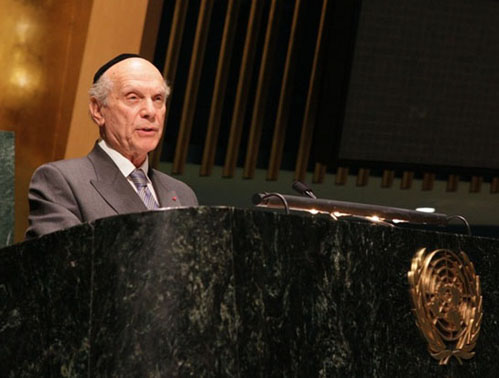 The United Nations commemoration of the 2600th anniversary of Buddha’s Enlightenment, sponsored by the Sri Lanka Permanent Mission, was held to promote a message of peace and tolerance to the global community. Ambassador Palitha Kohona of Sri Lanka delivered the opening remarks to a gathering in the General Assembly which included 198 monks representing Sri Lanka, India, Pakistan, Bangladesh, Myanmar, Nepal, Cambodia, Thailand, Vietnam, Laos, the Republic of Korea, the Philippines and Japan.

Your Excellencies,
Leaders of the Buddhist community,
Ambassador Kohona,

Thank you for bringing us together to celebrate this joyous day of Vesak. I am pleased to participate in the commemoration of the 2600th anniversary of the enlightenment of the Buddha at the United Nations and join hundreds of millions of Buddhists who have embraced and practiced the beliefs and principals of the Buddha.

My contacts with Buddhism began in the former Soviet Union, subsequently in China, India and Thailand on Appeal of Conscience Foundation missions. I had the opportunity to meet with Buddhist leaders in those countries, visited many of the temples and shrines gaining firsthand knowledge of the great contribution the followers of Buddha made to nations and different parts of the world; and I don’t want to forget the Buddhist community in New Jersey and in New York, and your contribution to the United States which has enriched our multicultural land of freedom.

I also, from this podium in the General Assembly in the year 2000, it was my privilege to welcome at the Millennium Summit on World Religious Leaders many, many Buddhist delegations from all over the world. On this day of Vesak, let us rededicate ourselves to the things of Buddha — love, peace, harmony, compassion and tolerance.

The Jewish tradition stresses the need to love all of God’s children. Students in our schools are taught — early childhood days on, the “ahafta lareaha commoha,” love your neighbor as yourself, taken from Leviticus. We are instructed to pursue peace out of love for our fellow human being. The Bible makes very clear that this love is not exclusive to any one’s own ethnic and national group. We are all God’s children.

I’m a Holocaust survivor who experienced man’s inhumanity to man. Experienced hatred, conflict, ethnic cleansing, racism, the burning of my synagogue, the murder of my family in the death camps of Auschwitz. We remember that horrible period in 20th century right here in the United Nations on International Holocaust Remembrance Day.

And the question that I pose to myself — how does one transform from being a victim to an advocate for dialogue? How do you do that? Or must hatred remain a part of me as a result of man’s inhumanity to man? And you know, I made up my mind — having been spared and given life — not to look back, not to be paralyzed by the past but to devote a lifetime to awaken man’s humanity to man. Because I am a firm believer man has the capacity for humane deeds and actions. There’s not only evil in man, we also have kindness in our hearts and goodness in our hearts. And that’s what we have to awaken, man’s humanity to man.

And my credo,”live and let live”. I want to live, I want you to live. I want us to coexist. I want us to cohabit this earth, this planet, in peace and harmony. Visiting the destroyed churches, mosques in the former Yugoslavia, again on behalf of the interfaith Appeal of Conscience Foundation — which I founded 45 years ago — learning about the destruction of the churches and mosque — whether in Sarajevo or different parts, now Croatia and Serbia, or let us remember the sacred Buddhas of Bamiyan in Afghanistan — how can we forget the brutality?

It reminded me of the destruction of my own synagogue on Kristallnacht, November 9, 1938. So I feel the pain when I see a house of worship destroyed, it’s a flashback. I remember. I don’t forget. And this is why my colleagues and I and the Appeal of Conscience Foundation initiated a resolution which was passed by the United Nations General Assembly unanimously for the protection of religious sites in 2009 — Resolution A55/L81.

The destruction of any house of worship — be it church, mosque, synagogue or temple — is an attack on the jugular vein of the faith community. The desecration of holy places, of religious life leads to the destruction of human life. Painfully. I never thought it would happen in New York. Just last week a terrorist plot was uncovered to bomb synagogues and churches in this great city.

Now while we find in the annals of history bloody conflicts fought in the name of religion, thank God we have matured. War persists, but the underlying premises are no longer exclusively the religious differences. It is true that we still have vestiges of violent extremism, but the recent trend is toward mutual acceptance among the mainstream of religious leaders. Regrettably, believe it or not, there are still 30 active conflicts in the world many of which have religious dimension. Given that reality, we need to take firm action to douse the flames of war with the healing waters of peace.

Therefore, interreligious dialogue has become a vital tool for interreligious, intercultural and international cooperation. In this age of globalization interdependence, it is essential — and I’ve advocated now for many years — that we broaden our interreligious outreach away from Eurocentrism. The action now is in Asia — economic ties, political ties — and therefore we have to broaden our relationship with the Buddhist community, Hindu communities that make such an impact on civilization in Asia.

In the age of globalization, mobility and migration, it is crucial to assess how a society deals with others amongst them. Religious leaders who in bygone times could legitimately be accused of functioning as a dividing force must now be a force for unity amidst diversity. And let us strengthen those who believe in co-existence, and reject and isolate those who preach and practice hatred.

In the face of injustice and the trampling of human dignity and human rights, we cannot indulge in the luxury of indifference. Together let us resolve to speak out forcefully against those who incite violence and prejudice and demonize other faiths.

So the next generation has to be educated, devoid of intolerance. Yes, all should be taught a sense of pride in their faith and identity, however they must also be taught the responsibility to be able to respect in tolerance for those who do not share their beliefs and national origins. The greatest injustice to future generations is to bequeath our conflicts while the greatest legacy we can leave behind are the blessings of freedom and opportunity that come with peace.

This is a time of spiritual awakening around the world. And so, organized religion has an unprecedented opportunity to deal with the great issues facing us — poverty, climate change, hunger, terrorism, nuclear proliferations, spread of AIDS, and the destruction of the environment.

I’d like to conclude — I don’t know how many of you know the story of Noah and the flood, by show of hands just give me an indication. Now why was Noah’s civilization destroyed? Because of hatred and conflict and greed. But God was compassionate and forgiving and he made a covenant with Noah never again to destroy the civilization, and as a sign of the covenant was the rainbow.

How many colors does a rainbow have? Seven. You can identify each color in that rainbow. And what’s the lesson? What’s the message? In order for a civilization — our civilization — to survive, we have to have respect for every color, every culture, every faith community. And if we blend together as we do on this day, then we are assured no further destruction of our civilization.

That’s the challenge for all of us. We live in an imperfect world, it’s our challenge to perfect it. In Hebrew our mission statement is, “teculolam,” building a better world. May we be guided by Aaron, the high priest who was an Ohave shalom, an Ohave shalom, who loved peace, pursued peace — as well as by Buddha who said, “better than a thousand hollow words is one word that brings peace”.

And the Buddha’s enlightenment, may it influence our daily life in dealings with our fellow human beings — bound with love, compassion and tolerance for the benefit of all mankind.

Thank you and happy, happy birthday.