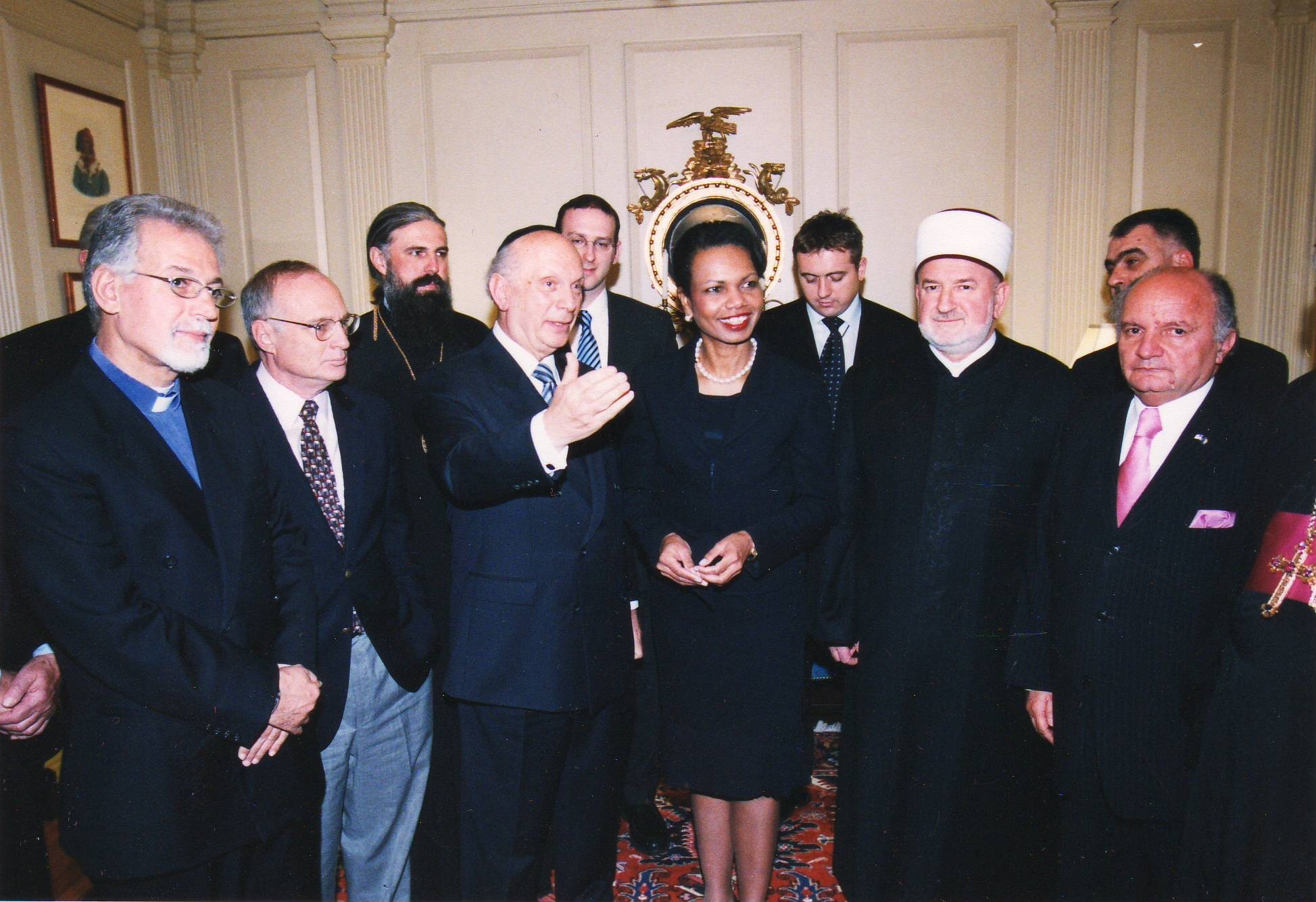 November 23, 2005—-In commemoration of the 10th anniversary of the signing of the Dayton Accords that ended the brutal war in Bosnia-Herzegovina, the Appeal of Conscience Foundation invited religious leaders from that country to Washington to participate in a round table discussion, organized by the Appeal and held at the Department of State, entitled, “Inter-Religious Cooperation in Building a Civil Society in Bosnia and Herzegovina”, as well as other events organized by the Department of State and the United States Institute of Peace.

Dr. Mustafa Ceric, Grand Mufti of the Islamic Community of Bosnia-Herzegovina, Orthodox Bishop Vladika Grigorije of Herzegovina and Jacob Finci, President of the Jewish Community of Bosnia-Herzegovina met in a special session to urge the political leaders of Bosnia to amend the Dayton agreement, which was instrumental in ending the war, but is now outdated and in need of revision to bring about a unified country. In the roundtable discussion, organized by the Appeal of Conscience Foundation at the Department of State, the religious leaders discussed pertinent issues with the three presidents of Bosnia-Herzegovina, Ivo Miro Jovic, Borislav Paravac and Sulejman Tihic and then attended a luncheon hosted by Secretary of State Condoleezza Rice.

The Appeal of Conscience Foundation, an ecumenical foundation of religious and business leaders dedicated to the preservation and improvement of religious and human rights, has actively pursued the quest for peace, tolerance and cooperation in Bosnia-Herzegovina since 1992 at its conference in Berne, Switzerland attended by leaders of the four major faiths in that country and again in Vienna, Austria in 1995, when it convened a second conference for those leaders to urge them to demand the cessation of hostilities. The Appeal supports the efforts of the Department of State to bring about a unified Bosnian state that will enhance the rights of minorities and provide for the establishment of a governmental structure that will allow all ethnic and religious communities in Bosnia-Herzegovina to have greater and more secure opportunities to follow their faiths and traditions.

Nicholas Burns, Undersecretary of State for Political Affairs, said in his opening remarks that, “I remember how the Appeal of Conscience Foundation convened a Conflict Resolution Conference in March 1995 in Vienna. That conference led to a call for understanding and reconciliation that reverberated for months later in the corridors of Dayton, when the Appeal of Conscience called for spiritual support for the U.S. and other negotiators, as we sought a comprehensive solution to end the fighting. Now, ten years later, I am happy to see Bosnian and international religious leaders convene again to provide spiritual support as we modernize Dayton and look to a better future for Bosnia and Herzegovinia.”