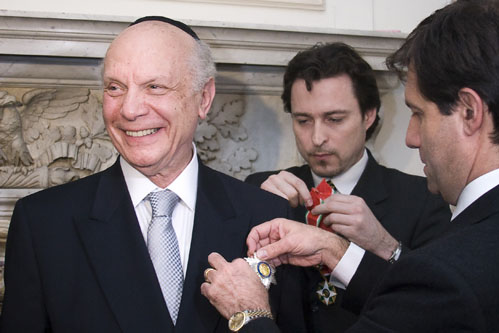 Ambassador Francesco Maria Talo presents the Order of the Star of Italian Solidarity to Rabbi Arthur Schneier, ACF President at the Italian Consulate. The Italian government honored Rabbi Schneier for his humanitarian outreach, his efforts to better relations between the United States and Italy and for his leadership as a bridge-builder between cultures and religious communities around the world.

The award was originally instituted in 1947 to recognize the achievements of those Italians and foreigners who had played a distinguished role in the reconstruction of Italy after World War II.

The event took place during the world’s observance of Holocaust Memorial Day (Yom Hashoa). Rabbi Arthur Schneier commended the Italian government for holding an annual ceremony in which they read the names of all the members of the Italian Jewish community who perished during the Holocaust. Rabbi Schneier also thanked Italy for joining the United States and other nations in not attending the Durban II Conference which will be held in Geneva because of their objections to the inappropriate singling out of Israel for criticism.