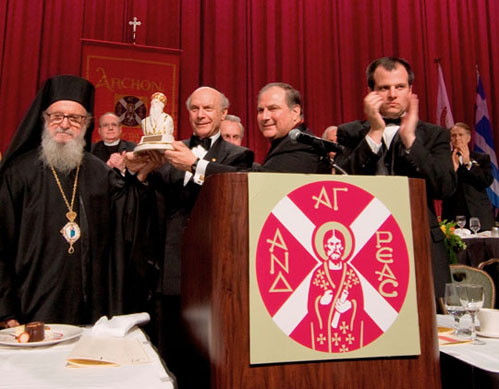 The Order of St. Andrew the Apostle, Archons of the Ecumenical Patriarchate in America honored Rabbi Arthur Schneier as the 23rd recipient of the Athenagoras Human Rights Award. The Award is presented annually to a person or organization, which has consistently exemplified by action, purpose and dedication, concern for the basic rights and religious freedom of all people.

Ecumenical Patriarch Bartholomew I described Rabbi Arthur Schneier as “a dear friend and colleague in interfaith dialogue and in the struggle for human rights around the world [who] has always offered the Ecumenical Patriarchate his outspoken support for the challenges it faces”.

Archbishop Demetrios added, “Rabbi Schneier, a survivor of the Holocaust, has been vocal in his support of religious freedom for the Ecumenical Patriarchate and has joined His All Holiness on many occasions to promote the principles of ecumenism and brotherhood. One such instance was at the 1994 ACF-sponsored Conference on Peace and Tolerance in Constantinople, where the leaders of the three major monotheistic religions signed the Bosporus Declaration to condemn violence in the name of religion”.

Honored dignitaries at the event included the Honorable James F. Jeffrey, U.S. Ambassador to Turkey; His Excellency, Ioannis Plakiotakis, the Deputy Minister of Defense of Greece; His Excellency Archbishop Celestino Migliore, Apostolic Papal Nuncio to the United Nations; the Honorable Senator and Archon Paul Sarbanes; and White House Correspondent for FOX News, Mike Emanuel, served as Master of Ceremonies for the evening. The Award was presented during the Grand Banquet of the Order’s annual three-day assembly at the New York Hilton.