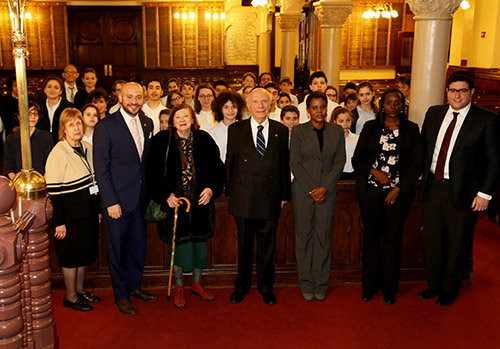 Holocaust survivor Rabbi Arthur Schneier, recipient of U.S. Presidential Citizens Medal, Senior Rabbi of Park East Synagogue in Manhattan, hosted a first-time gathering of Holocaust survivors and survivors of the Rwandan genocide who met on International Holocaust Memorial Day. Jonny Daniels, Founder of “From The Depths,” a Holocaust remembrance foundation, announced a new program to bring survivors of all genocides together to learn from one another and to teach and inspire others to prevent this from happening in the future.
The program is comprised of taking students to Rwanda with survivors of the Holocaust and to the sites of the Nazi atrocities in Eastern Europe.

“As the third and fourth generations of Holocaust survivors, we have a social responsibility to stand as witnesses to the witnesses and against all genocides regardless of who they are perpetrated against,” said Jonny Daniels, Founder and Executive Director of From The Depths.

The Rwandan Genocide survivors were represented by Mrs. Jacqueline Murekatete and Mrs. Consolee Nishimiwe who shared their personal stories of survival, both being the only members of their families to survive.

“I was inspired to speak of my painful past due to my personal encounter with a Holocaust survivor, said Mrs. Murekatete. Hearing him tell his story, it gave me the courage and understanding of the importance of telling my story to the world.”

“The genocide tore my family apart, and as a 14-year old child, I was subjected to the most painful torture, the effects of which I live with until today,” Mrs. Nishimiwe. “The work of Mr. Jonny Daniels and From The Depths ensures that this should never happen again, to any person.”

As part of today’s gathering, the survivors addressed the students of the Rabbi Arthur Schneier Park East Day School. The survivors spoke of both genocides and the significance of the phrase “never again,” and how it refers to all people, and underscores the responsibility of the younger generations to act as witnesses to the witnesses.

“No human ever deserves to die as result of the ethnic or religious group they were born into, said Mr. Daniels. No human should ever be allowed to take another’s life in vain. By coming together as a collaboration of people from all walks of life, we show that together we will stand strong, make our voices heard, teach the next generation and instill in them the understanding that we are all responsible for each other.”