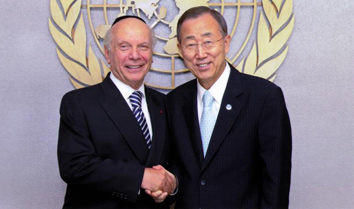 Thank you for inviting me to join your congregation’s commemoration of the International Holocaust remembrance day. I was very moved by last year’s observance in this house of worship, and I am glad to be back.
This year is also special. It is the centennial of the birth of Raoul Wallenberg. And it is the year in which your friend and mine, Arthur Schneier, marks half a century as Rabbi of Park East Synagogue. Congratulations.

Rabbi Schneier, not long ago you acknowledged that religious leaders have a tremendous responsibility. You said, and I quote: “We can use our pulpit for incitement, or we can use our pulpit to pronounce peace and coexistence”. We all know which side you have chosen: the side, the cause, of mutual respect and understanding. We at the United Nations admire what you have done during your decades of service. You have been a bridge-builder.
You have provided a voice of moderation, helping us, as you have put it, to “swim together against the tide of extremists and radicals”.
You have been a strong advocate for UN values and the UN Alliance of Civilizations. And you have done all this after having to rebuild your own life.
So much of your world was destroyed – by the Nazis, by anti-Semitism, by persecution.
I know that many of you here today also experienced this first-hand. Yet you recovered. Even more than that, you have not given up on humankind, though you had good reason to do so.
Instead, Rabbi Schneier, you have played a leading role in our shared efforts to build a world of dignity and security in which no such horror can ever happen again.
That is the mission of the United Nations, and we thank you for being our partner in it.

Ladies and Gentlemen,
The United Nations attaches great importance not only to this single day of remembrance, but to our work throughout the year to educate the world about the universal lessons of the Holocaust.
Our Outreach Programme continues to mobilize teachers and young people.
Our partners include Yad Vashem and others. I visited Yad Vashem before and I’m going to visit again this month.

This past November, we worked with the International Criminal Court and the International Bar Association on an event that examined the legacy of the Nuremberg laws and their influence on jurisprudence today. And this year, on International Women’s Day in March, our Holocaust and the United Nations Outreach Programme is organizing a conference at the University of Southern California on women and the Holocaust and the impact of war and mass violence on women today. The Holocaust affected so many different groups, and so many professions, that it is vital to reach new audiences with this history.
Next week at the United Nations, this year’s General Assembly observance is dedicated to the children who faced the evil of the Holocaust. One and a half million Jewish children perished. Tens of thousands of others were murdered, including people with disabilities, as well as Roma and Sinti. Many died of starvation or disease. Many others were orphaned by the war, or ripped away from their families.

We will never know what these boys and girls might have contributed to our world. And many survivors were too shattered to tell their stories. Today, we seek to give voice to those accounts.
And every day, everywhere, the United Nations works for children’s well-being. We draw inspiration for this work from the landmark Convention on the Rights of the Child and its protocols on children in armed conflict and the sale of children, child prostitution and child pornography. Children are uniquely vulnerable to the worst of humankind. We must show them the best this world has to offer.
Excellencies, Ladies and Gentlemen,
As you may know, this month marks the beginning of my second term as Secretary-General. I thank you for your support on this. It is a great honour to serve this great organization for another five years.
This is a pivotal moment in world affairs. We are witnessing shifts in global economic power. We have seen the birth of democratic movements in North Africa and across the Middle East.
Climate change has placed us on a collision course with the planet.
Inequality, economic uncertainty and distrust in institutions are all on the rise. Technology continues to link us more closely than ever before. Future generations may well describe this period as an inflection point, when the contours of a new world began to take shape.
We have made important progress since the Second World War and the Holocaust.
But in a world of 7 billion,and with global population expected to increase by another 500 million in just the next five years,we must all do more to steer as a global society.

This past September, I identified five imperatives for collective action:
These are sustainable development, prevention, building a more secure world, supporting countries in transition and empowering the world’s women and young people.
Next week I will unveil a plan of action that aims to advance our work on each of these imperatives, these generational opportunities. Our work for human dignity will underpin all we do. And our memory of the years when that dignity was torn from so many millions — so fast, so brutally, is likewise part of the bedrock from which we operate.
Let us all work together today to realize human dignity for all, and to realize the UN’s full potential in building the future we want.